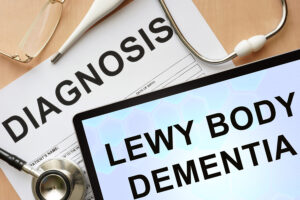 Elder Care in Pennsylvania: Do You Know the Symptoms of Lewy Body Dementia?

Lewy body dementia (also knowns as dementia with Lewy bodies) is the third leading cause of dementia in the United States, and is often misdiagnosed as Parkinson’s disease or Alzheimer’s due to the similarities in their presentation.

Lewy body dementia is caused by the presence of Lewy bodies in the brain. These protein deposits can lead to serious problems in thinking and reasoning, even if scientists do not know exactly why they form. Their name comes from Dr. Frederick Lewy, who discovered them in the early twentieth century when he was working alongside Dr. Alois Alzheimer, for which Alzheimer’s disease is named. Lewy discovered that the protein in Lewy bodies is prevalent in the brain, but as of yet, no one has been able to figure out what it does for the body when it is working correctly.

As you can see, there is a lot of mystery surrounding Lewy bodies and the dementia they cause, but there are, however, some telltale symptoms of the disease that you or your elder care might notice in your aging parent or loved one.

Here is a list of the most common signs and symptoms to keep an eye out for:

If you or your elder care aide suspect that your aging parent or loved one might be suffering from Lewy body dementia, schedule a doctor’s appointment as soon as possible. This disease is not curable, but it is possible to manage it in some ways, and make life more comfortable for the person who is experiencing it.

If you are considering hiring elder care in Pennsylvania, call the caring staff at Extended Family Care of PA at (888) 660-6478.