Science Daily reported on a study that directly links diabetes to Alzheimer’s, the most common form of dementia. This research is very useful in planning for elder care because the onset of diabetes occurs much earlier than any memory impairment from dementia.

The Triple Threat – Obesity, Diabetes, and Alzheimer’s
It is well established, as noted on MedicineNet, that obesity causes increased risk for getting diabetes. The most common form of diabetes is Type 2. In Type 2 Diabetes, the body becomes insulin resistant. Overeating causes the cells to trigger insulin resistance, which in turns causes the blood-sugar levels to rise that cause diabetes.

The new study reported in Science Daily is from work done in Melbourne, Australia at the Monash University, published in the journal called Neurology.

The research is very technical, yet the important findings noted that of the 816 people studied, who were around 74-years old on the average, 397 had the beginnings of Alzheimer’s in the form of mild memory impairment, 191 had Alzheimer’s, and 228 had no memory impairment. Those that had diabetes consisted of 124 of the total. 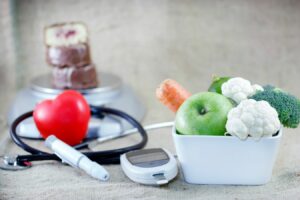 The people with diabetes were twice as likely to have Alzheimer’s than those without diabetes. The researchers attributed this to the fact that diabetes, on its own, causes the formation of “tangles” in the brain. Tangles are a buildup of a protein called “tau” in the brain. The Alzheimer’s Association says that tangles interfere with normal brain function, especially in cognitive skills and memory processing.

The research from Australia showed that of those with diabetes, tangles were present in greater numbers. The conclusions of the research showed the association with diabetes and brain cell death, which is a contributing factor for those that go on to get Alzheimer’s.

Diabetes as a Predictor of Future Alzheimer’s
The American Diabetes Association reported in 2014 that the number of Americans with diabetes was already over 29 million or about 10% of the American population. For seniors, that are 65-years old or older, the percentage having diabetes is about 26%.

The Center for Disease Control (CDC) reports that a National Health Study done in 2010 to 2012, determined the age of onset of the new diagnosed cases of diabetes as follows:

Of the new 1.7 million cases of adult diabetes, these were the proportions by age:

Until now, the linkage between diabetes and Alzheimer’s was less clear from the scientific research. The Alzheimer’s Association says that the vast majority of people with Alzheimer’s are 65-years old or older. Since diabetes may give advance warning of increased risk for Alzheimer’s, this information is very helpful.

If you are considering hiring elder care services in Pennsylvania, call the caring staff at Extended Family Care of PA at (888) 660-6478.

Diabetes and brain tangles may be linked independently of Alzheimer’s disease
http://www.sciencedaily.com/releases/2015/09/150902191345.htm?utm_source=feedburner&utm_medium=email&utm_campaign=Feed%3A+sciencedaily%2Fhealth_medicine%2Fhealthy_aging+%28Healthy+Aging+News+–+ScienceDaily%29#